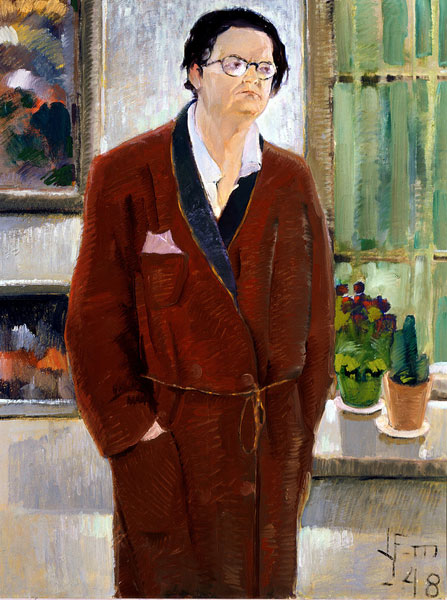 Self portrait "Without Mask". This is also the title given to Fernström's 11th symphony, which he composed at the same time.

John Fernström was born 1897 in Ichang, China, where he also spent the first ten years of his life at the mission his father directed. He came to Sweden in 1907 and started to study the violin at the Conservatory in Malmö. He was with the Symphony Orchestra of Helsingborg from 1916 until 1932, with some interruptions for studies; first as a violinist, later as one of its leading conductors.

He was the principal conductor of the Malmö Broadcasting Orchestra between 1939 and 1941 and from 1948 until the end of his life, 1961, he was the director of the Conservatory in Lund and the Lund Symphony Orchestra, both of which he initiated.

In 1951 he founded the Nordic Youth Orchestra, which still today is an almost compulsory step for all young Scandinavian musicians on their way to become professional musicians. In 1953 he was elected member of the Swedish Royal Musical Academy.

Ever since childhood, he had a very active interest in painting, which he also studied in Paris. His production is impressing, both in terms of diversity and size, be it music, paintings or poetry. He wrote 12 symphonies, 8 string quartets, many other chamber music pieces, concertos (among which two violin concertos, a basoon concerto and a clarinett concerto), two operas, and a large number of songs and choral pieces. His autobiography, "Jubals son och Blodsarvinge" appeared in 1967, and appeared in a new edition in 1998..